Students are telling me that chapter 7 is their favorite in Superconnected. I guess that’s to be expected: it’s the one focusing on relationships, and that means friendship, dating, flirting, sex, and other things that make life fun. As the book does at every turn, though, it looks at the downside of such things along with the upside: the conflicts and problems that interpersonal relationships bring to our lives. Keeping in mind that digital relationships are not necessarily bound by some of the limitations inherent in the physical world, this chapter also looks at their lifespan — their ability to transcend physical life and death.

Social connections and relationships often outlast and outlive the physical. This has always been the case. In hearing stories of people who lived before us (such as ancestors or historical figures), or seeing photos or videos, we can feel a connection to them. In my research, which is excerpted throughout the book, many of the people I interviewed told me of deep connections with long-deceased family members, some of whom they’d never met, as in:

My great-grandmother – there’s a giant picture of her in my mom’s house. Everyone’s always telling me we look alike and that I’ve got some of her traits…I’ve heard a lot of stories about her. And yeah, I feel connected to her.

Depicted via video, audio, and photos, individuals can remain visually and cognitively present even after they are physically gone. Digital technologies can increase this sense of presence in unique ways. Holograms provide the illusion of movement through space. Through digital editing, musical duets have been sung with people who have passed away. Images can be spliced into an existing photo or video or movie to make it seem as though people are physically together when they may have been separated by many years. While intellectually it may be understood that someone who has been digitally depicted is no longer alive, the experience can be genuine and resonant and deepen and enhance bonding. The same processes that helps us feel connected to people who live many miles away, then, can help us feel connected to the deceased.

The dead also live on on the internet and in social media. While individuals were once sequestered in funeral parlors and gravesites after their deaths, social media and digital technologies have helped to reposition death as a more visible, even social, event. Internet and social media platforms enable user profiles to be reworked to form ongoing memorials and to gather publics together as mourners around them (Berlant 2008). Blogs and websites are set up as a repository of photos and testimonials. Funeral homes have created online spaces for memories to be shared.

Those who have died are not only remembered and spoken of but often spoken to on social media, demonstrating the desire to keep the memory of the deceased alive and even the desire to remain in some kind of contact with him or her. Social media sometimes seems to have a kind of “airborne” quality that may encourage the feeling that the deceased can be somehow “reached” across time and space. Though this is obviously a purely emotional response, it can still provide comfort in a very difficult and transitional time. As another of my interviewees related:

I witnessed and participated in my first electronic memorial service. People gave loving testimonial after testimonial about how this dear woman had helped them in their time of need, how she touched their lives, how much they would miss her and glad they were that her suffering was over..in spite of the fact that they had never met her! This woman’s impact was legendary and most of the people she helped with her messages of support and love, never knew how ill she really was….I will never forget the impact that memorial service had on me…..as I read the messages on the screen I literally cried. I am not sure who I was crying for — the woman who had died or the people who expressed how wonderful she was and how much she had meant to them.

As such a testimony indicates, even those who have never been met face-to-face can be grieved for, and this grief can expressed, via digital technology.

The deceased can be digitally reimagined as an audience with whom one can “interact.” Messages may be directed to those who have passed away, sometimes on memorial sites that persist for many years, even indefinitely. Photos and videos of the deceased are widely shared and spread. Those who may be unwelcome can intrude on the open online memorial; different audiences or contexts can also come into contact, initiating “context collapse” even after death (Marwick and Ellison 2012). Social media, then, can provide a kind of channel by which the dead can remain in physical space and where it can feel like we are encountering them and experiencing a type of interaction with them.

In all these ways, and many more to come, what it means to be present to one another, and in interaction, is changing. Truly, the human lifespan has in effect become digitally expanded.

We see the flexibility, the malleability, of many aspects of social life, throughout Superconnected. 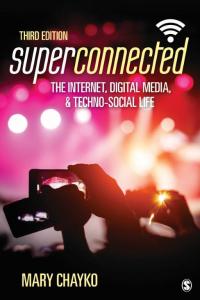 Click to see the short animated video about Superconnected